Love Withington Baths and Drunken Butcher's Summer Banquet at Withington Leisure Centre, in which ZUMBA is Replaced with BEEF

Regular readers of this blog, who know of my reputation as an elite, finely honed athlete, will not be surprised to learn that I spent a good portion of last Sunday at a local sporting facility - Withington Leisure Centre or, as it is more affectionately known, Withy Baths.

Of course, I was there to eat and drink, not exert myself in any other way. I do actually really like swimming but dislike getting my hair wet or water in my eyes, and therefore have to swim in the manner of an old lady or a small dog with my head held high above the water - eating and drinking is something I am far more skilled at. Still, Withington Baths is an important and well-used local facility that finds itself with something of an uncertain future - it was granted a two-year stay of execution last year thanks to overwhelming public support, but is under threat once more with the planned opening of the new Hough End facility in 2015. Now, the Love Withington Baths campaign aims to highlight how this beautiful old building could be used for far more than just sport and could become an important part of community life once more, offering facilities such as a cafe, workspace, art and craft space, children's parties and so on. 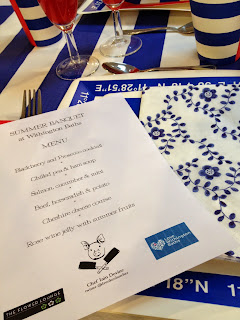 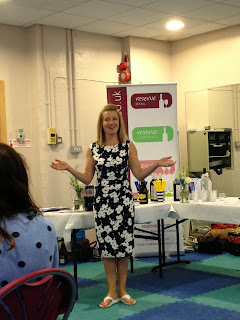 Which brings me on to last Sunday's Summer Banquet. Only local dynamo Sian Astley - pictured here during her welcome talk - would have the vision and enthusiasm to transform the Zumba room to a pop-up restaurant offering a five course, sit-down menu for 40 people, but that's exactly what she did. Not alone, of course - a host of local traders showed their support for this worthy cause, with Sian from Flower Lounge providing the beautiful table decorations (one of which I bought to take home, where it is still lovely nearly a week later), Kate from Reserve Wines offering wine tastings and Sarah from Cocoa Cabana showing us how to make Manchester Tart truffles (stickiest hands I've had all week). 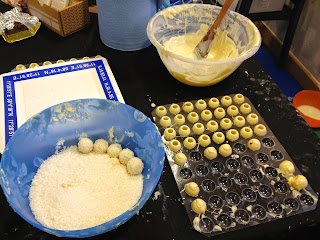 Food came courtesy of my old mate Iain, otherwise known as the Drunken Butcher, who had contemptuously farted in the face of the Baths currently having no kitchen facility and knocked up five glorious courses of cold food - to wit: 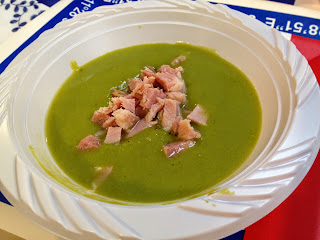 - Salmon with cucumber and mint (cooked in Iain's sous-vide machine, which I covet most deeply) 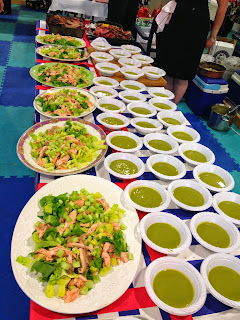 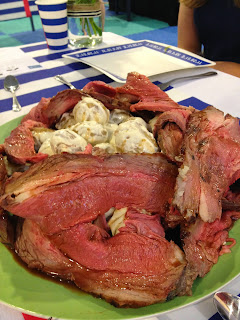 - Beef with horseradish and potato salad (the most beautiful, pink Dexter brisket from Taste Tradition, whose meat is second to none) 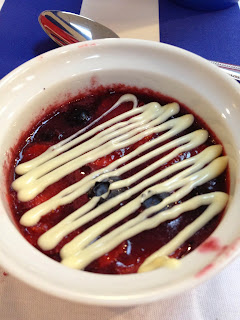 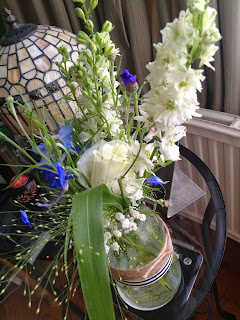 All of this was served on communal platters set down in the middle of each table, which meant the opportunity to meet lots of nice new people whilst politely wrestling over the last piece of beef. The food was all flawless, and ridiculous value at £20 a head including a welcome cocktail and water throughout the meal - it's little wonder that it was a complete sell-out.

If this is a just a glimpse of what can be done here, then the Love Withington Baths campaign is certainly one worth getting behind - I did ask Si when the next event was, but she looked a little as if she might cry so I'll allow her a week off at least before I enquire again. You can find out more about the campaign by following their Twitter feed @lovewithybaths or liking their Facebook page (where you can see a set of photos taken by a proper, skilled photographer rather than an enthusiastic girl with an iPhone). After all, there aren't many venues where you can pop upstairs to the loo and see loads of whippets in lycra busily working out in the gym whilst you contemplate the five courses you've just consumed...
Posted by Liz at 03:44

Thanks for the great comments about my wonderful son Iain - I'm very proud of him as you can imagine, and so pleased to hear that the event was such a success (and by the way, I gave him the sous vide machine for Christmas last year - perhaps Santa could put one in your stocking?) xx

As you know, I am one of Iain's biggest fans, and I thank you both for your comment and for raising him so impeccably. As for the sous-vide machine, I have a birthday in November as well as the opportunity for Christmas giving - I'm also going to put it out there that I'm VERY low on Jo Malone Red Roses perfume :) xx