Things to Cheer You Up in Manchester - Books, Crafts and Films to Banish Those Autumn Blues

Well, season of mists and mellow fruitfulness it may be, but so far I have only noticed September offering increasingly dark evenings, motorways clogged with cars bearing sulky-faced back-to-school children (and teachers), and a high chance of discovering the cat sprawled in front of a radiator that has now had to be turned on. Still, whilst it may be tempting to simply retreat under the duvet and wait for more exciting times to come (Bonfire Night, Christmas, anything that licences daytime drinking), there are actually a number of nice things you could be doing instead...

Go to a book festival. This is always a promising option, as attendance at something so literary during the day pretty much means you can spend the evening in whatever pursuit you choose and feel no form of guilt whatsoever. This weekend it's the Alderley Edge Community Book Festival, organised by Oxfam and due to open today at 11am with Edwina Currie reading from the latest instalment of her memoirs (and I think we ALL remember some of the disturbing details she revealed in the LAST one). Also appearing are Erica James and Melvin Burgess, and there will be an auction of rare books as well. It's all for a good cause, so get yourself down to Festival Hall - I will probably permit an ice-cream after to reward you for your generous efforts.

Cunningly combine a cinema-cum-pub visit. This one has WINNING IDEA stamped all over it - simply show one of Mr Liz's favourite films (Clerks) in one of Mr Liz's favourite venues (a pub - in this case, the Black Lion in Salford) and provide beanbags to loll on and burgers and beer to purchase - it's like a perfect kingdom of man, the opposite in fact to all those sad, awkward males you see lurking miserably outside the changing rooms in Top Shop. The showing forms part of the ‘Masters of Cinema’ series curated by Future Artists, the creative collective who run the arts venue at the pub - Hitchcock's Vertigo will be shown the following week to form an intentional contrast to the slacker vibe of Kevin Smith's classic. Clerks will show at 8pm on Tuesday 18th September, and advance tickets for just £4 a go can be bought here (remember to take plenty of beer money though).

Get Crafty. I'll be doing a proper post on this once I've had a chance to get down there and have a look, but just a quick heads up that Manchester Craft & Design Centre in Manchester's Northern Quarter is currently celebrating its impressive 30 year history with a specially commissioned Crafting History exhibition that runs until 10 November. Now, I love beautiful things, but as I was apparently born with plenty of thumbs but no elegantly able fingers, I have to admire work that other people have done rather than ever create my own - pieces on show here include a site-specific installation by ceramicist Carys Davies (I will not be letting Mr Liz anywhere near this, as I can already imagine the potential for breakage) as well as other gorgeous things such as this exquisite necklace by Julia Roy Williams *wants* 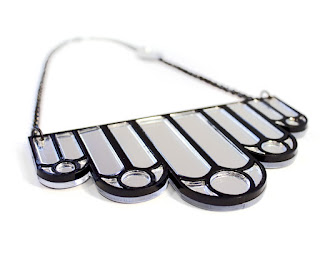 The exhibition runs until November 10th, and you can find out more about it on the centre's website.

So maybe September's not looking so bad after all, particularly with the Manchester Food and Drink Festival on the horizon as well...
Posted by Liz at 01:32