The Liquorists' Rum Trail: Manchester Rejoices at NO HANGOVER GUARANTEED

Amongst the many good things about getting older (better wine, better shoes, better restaurants, going to bed early with no shame, thinking about joining the Women's Institute), lurk one or two that are not nearly so welcome - hangovers, for one. Of course, it may just be that when I was younger I simply adopted the unarguably effective practice of never stopping drinking, thereby delaying the inevitable through a continuous "topping-up" process, but I just don't remember having real, work-stopping hangovers until I was about 25. Now, I sometimes get hangovers when I've not even been drinking, and it is with great relief, therefore, that I can confirm that The Liquorists' mighty promise of "No Hangover Guaranteed" continues to hold good - for me, anyway.

If you've seen my previous posts on The Liquorists, you'll know that they are - to use their own words - "plonk pushers": in other words, they organise devilishly alcoholic trips around Manchester based on one particular spirit. We've previously blazed the Whisk(e)y Trail around the Northern Quarter and sailed upon the mighty Gin Barge; last night, it was the turn of RUM - six bars, six tots of rum, six rum cocktails and - most importantly - NO HANGOVER GUARANTEED.

*ignores cries of "can't be done!" from the back* 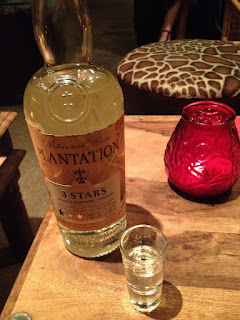 The trail started at 7pm in Hula Bar, a blink-and-you'll-miss-it little gem tucked away on one of the corners of Stevenson Square. Here, we met 14 other cheery souls all similarly intent on the pursuit of rum goodness, and Barry, our genial host for the night, doled out the first rations of the night - Plantation Rum by Bibendum Spirits, a clear, slightly sweet shot that slipped down no trouble at all. The deliciously tangy Atlantic Boat Club Daiquiri soon went the same way and we were swiftly moved on, despite the fact that Hula were playing Tiffany and I wanted to stay. 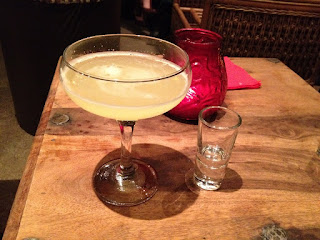 A brief, brave walk through the rain (luckily I had my virtual rum mac on) brought us to Keko Moku. This was my least favourite venue of the night simply because it was so busy - normally on a trail you sit in a specially reserved area, but the pocket-sized nature of Keko made this impossible. Still, we very much enjoyed the shot of 12-year-old El Dorado Rum (most people's favourite drink of the night) and the accompanying Swizzle cocktail, which contained both blood orange AND tea, and is therefore clearly suitable for promotion as a breakfast item. 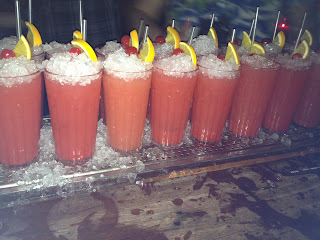 Next up, Odd Bar, and a bit of a departure from the shot-and-cocktail theme: here, our Matusalem rum was served with a glass of pale ale. Now, I prefer a cocktail to a beer any day of the week and therefore sacrificed my glass to the greater good (ie not having a hangover the following day), but those who tried it proclaimed the combination to be a triumph - especially Mr Liz, who remained suspiciously quiet on where exactly my pale ale might have disappeared to. 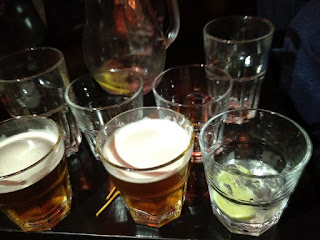 Fourth stop was Tusk, a venue I very much liked as the musical selection (like Hula) seemed to suggest that we were somewhere in the late 80s/early 90s, although it was perhaps all a little too brightly lit to flatteringly showcase a group of people who had been necking strong spirits for several hours now. Here we had a shot of the 63% Wray and Nephew Jamaican Rum (which we found was much easier to drink with the addition of a splash of water) and a lovely cocktail described as halfway between a daiquiri and a margarita. 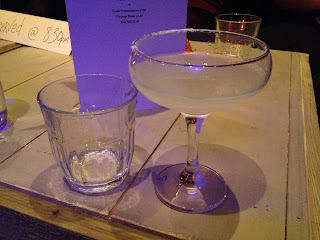 Just across the road now to the newish bar/deli/restaurant The Blue Pig, a very promising venue if the platters of bread, cheese and meat that we devoured here are anything to go by. On my way to the toilet I was beckoned over by a young man who seemed very keen to speak with me, my rum-induced delusions (still got it, even though I'm a hundred and ninety five years old, still hot even after twelve pints of rum, etc etc) cruelly shattered when it transpired that he'd been admiring the bottle of Brugal Blanco on our table and wondered how much it cost to buy. MEH. 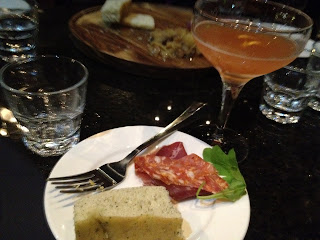 Finally, we were whisked away in a fleet of taxis to our last, secret location (not actually that secret if you know ANYTHING about The Liquorists, but I won't spoil the surprise) for Pussers Navy Rum, a Painkiller cocktail (essentially rum and coconut milk in a tin mug) and a big fat Thai Green Curry just to soak up some of that booze. Whilst you do get little taster platters at each venue, nothing placates a rum-filled stomach like curry and rice, and I say this after years of extensive scientific testing (*notes with some satisfaction that all those years at university were not, in fact, wasted*). 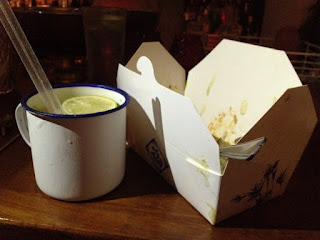 So, once again, a great night was had by all. The Liquorists are brilliant people - enthusiastic, generous and knowledgeable, and their trails are great value. We went on a Friday, but prices are from as little as £35 a head if you go on a Wednesday night - see the website for full details as the Rum Trail runs until the end of September. And the very fact that I'm sitting here at 9.30 the next morning writing up the blog should prove that it's true - The Liquorists really do offer NO HANGOVER GUARANTEED...*

*NB, those on the trail (naming no names) who sloped off to Whim Wham or Socio Rehab afterwards and drank MORE have no-one to blame but themselves - you have broken the terms of the GUARANTEE *stern face*
Posted by Liz at 02:41