Now, for all the crazy and unfounded accusations regularly hurled my way about how I'm never at home, always out, blah blah BLAH, I am actually very fond of the odd night in - the kind where pyjamas are donned immediately after work and the sofa embraced like a long-lost friend. However, it's starting to look very much as if a couple of extra days in the week might be needed in order to facilitate this night in, for it's getting increasingly difficult to find an evening that is not now regularly ear-marked for something nice, particularly round these here Didsbury parts. For example, Monday night is supper club at Love 2 Eat Deli whilst Thursday night is pie night; Tuesday nights bring free cheese and crackers at the Dog and Partridge whilst the weekend is just, well, the weekend. That pretty much just left Wednesdays as a shining beacon of early-to-bed-ness (apart from the last Wednesday of every month, which is of course Mark Addy Gourmet Night - you see the problems I'm up against here), a reliably nothingy sort of night with which to charge ones batteries ready to go again during the remainder of the week.

Well, turns out Wednesdays are not so reliable as they once were, for they are the preferred meeting night of the estimable Didsbury Wine Club - which is, essentially, a group of like-minded South Manchester quaffers who meet up on a regular basis to appreciate wine, discuss wine, learn about wine and, most importantly, neck loads of the stuff. Frankly, it's a wonder it's taken me so long to get on board with this one: yesterday was my very first Wine Club, although it most certainly shall not be my last. Venues and events vary from month to month: this one was at The Violet Hour in West Didsbury, a Euro- and Olympic-inspired event which pitted wines from seven different countries against each other in a fight off to the death (or whatever the wine equivalent of this might be - a fight to the pouring-down-the-sink-ness, perhaps). This is the sight that greeted me on my arrival... 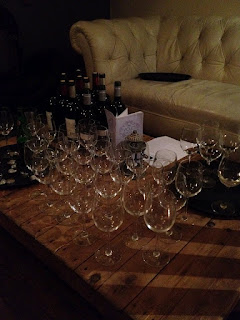 ...although, tragically, it soon transpired that I was expected to share this little haul with the twenty or so other cheery souls also in attendance. The ebullient Omar explained the rules of the competition (which frankly were perhaps a little more complicated than necessary for a group of people each about to drink seven glasses of wine) and we were away: in groups of four we graded each wine out of ten and then had a go at guessing the price of each, tasting three whites and four reds in total - an Italian Pinot Grigio, a South African Sauvignon Blanc, an American Chardonnay, a Chilean Reserve Merlot, a Spanish blend of Cabernet Sauvignon and Tempranillo, an Argentine Malbec and a Bordeaux from France (all of which were sourced from the superb Reserve Wines on Burton Road). My favourite was the Bordeaux, closely followed by the Malbec - these were the overall joint winners as well, which indicates either that I have an excellent grasp of what makes a good wine and all-round impeccable taste, or (possibly) that these were the final two wines sampled by a group of people who appeared progessively less keen to spit any of the wine out into the receptacles provided.

The evening ended with one of the teams each winning a bottle of the most popular wine (I'm a little vague on how these winners were decided, as once it became horribly clear that I was not one of them I did lose interest somewhat) to take home, and even those people who had NOT won (fix! fix!) would have been hard-pressed to feel that seven generous glasses of wine for the event price of £15 did not represent excellent value. Joining the Wine Club is free, and new members are always welcome - see the website for more details. There is also a Manchester Wine Club, and there will soon be a Chorlton one too, as well as plans in the pipeline for other locations.

In fact, the ONLY negative I can come up with is that I shall clearly become a regular - so next time you're haranguing me for never staying in, please remember that it's simply not my fault...
Posted by Liz at 11:52