Things in Didsbury continue to look up. After a few years of empty shop fronts, bland chains and dodgy boozers, we now have Hispi (for which I have developed a shameful, costly weakness), a couple of new tapas places, the lovely Casa Italia, SoLIta, a couple of great chippies, loads of independent coffee shops and a brilliant Nepalese place. And yet despite this array of shiny loveliness and temptation, I still find myself as often as not in good old Gusto Didsbury, a stalwart of the high street for many years now thanks to its reliably great pizzas, interesting cocktails and lovely leather booths, into which one may sink thankfully whilst lobbing excellent fries in the direction of one's mouth and slurping a decent red. 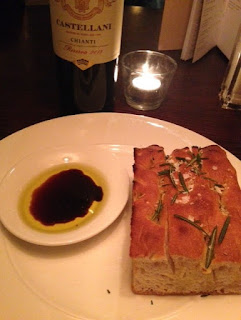 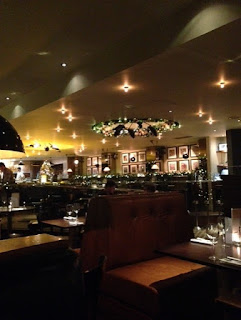 Of course, Gusto can do grown-up too, as proved by the new menu which we tried last week. As usual, most of the old favourites have survived the cut; in fact, most of the starters remain the same (no bad thing, in my opinion). Still, only wise to toy with a little focaccia - a plump, garlicky square studded with rosemary and salt and presented with olive oil and aged balsamic - whilst choosing, not least because my date for the evening is the Annoyingly Dairy Free Friend, who requests the allergy book (cue heart sinking) and spends several hours working out what he can have. I can (and would like to) have all of it, so I choose the oven roast pork ribs served with tomato barbeque sauce and coleslaw - not strictly a new dish, but one I've not had before, and which turns out to be a triumphantly meaty affair smothered in a sauce that strikes just the right balance between sweet and tangy, and perched on an excellent thin-cut coleslaw. Most of the dishes have some form of dairy in, but in the end the Annoyingly Dairy Free Friend is delighted with his half portion of tagliatelle with prawns and garlic - really good pasta with a decent amount of fat prawns in sweet chilli tomato sauce with fresh lime and rocket. This is the kind of dish that Gusto do well - good ingredients cooked simply and served up in generous quantities (as proved by the fact the the ADFF was outside having a fag when his dinner arrived and I hadn't even made a dent in it by the time he got back). 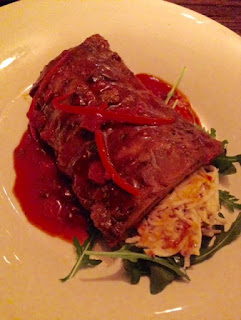 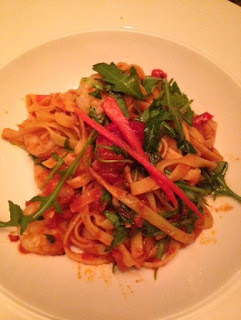 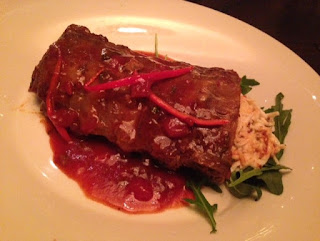 Mains are excellent. I have the new duck dish - a pan roasted breast with buttered winter vegetables, aged balsamic and honey - and it is just lovely. The duck is perfectly cooked - briskly seared on the outside and pink and juicy within (they will do it well done if you want, but look visibly relieved when I ask for it pink), and resting on a bed of interesting vegetables (although there is a hefty hit of chilli here that isn't advertised on the menu - not a problem for me, but others may wish to be wary). Despite this plate of meaty joy, I end up with total, utter dinner envy, as the ADFF has the whole salt baked sea bass and it is SPECTACULAR. The theatre of such a dish is always fun, involving as it does an intrepid member of staff setting up a table alongside yours and burrowing wildly into the salty casing in order to free the fish that lies within; this is expertly done by John, whose service is faultless all night. Indeed, after such drama the dish itself looks a little underwhelming, but its looks belie its stunning flavour - soft, gently flaking fish, infused with lemon and herbs from within and a good sturdy blast of saltiness from without. The ADFF practically sucks the bones clean; not a phrase I ever expected to use in polite company. The fish is not cheap at £18.95, particularly as it comes solo and requires the ordering of extra side dishes, but it is perfection, and to be honest I always order fries and some Italian fried courgettes whatever I'm having - a meal at Gusto is simply unthinkable without either or both of these splendid items. 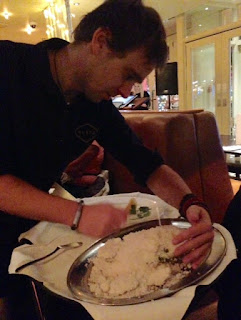 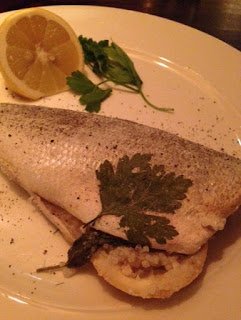 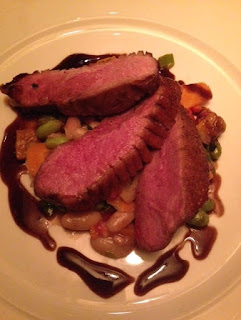 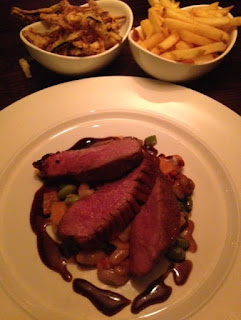 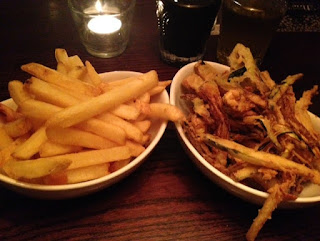 Desserts are the only misfire. The ADFF can only have the lemon sorbet, which fortunately he loves, but my basil and mint panna cotta - one of the new dishes - needs a bit of a rethink in my opinion. The panna cotta itself is fine, if unremarkable, but any subtlety of flavour is completely drowned out by a sea of heavily spiced plum compote. The flavours are reminiscent of mulled wine, but not in a good way - the spices hit the back of your throat and dominate what should be the star of the dish; there is also far too much of it. This is the only flaw of the evening though - service is knowledgeable and friendly, there is live music at an unobtrusive volume, and a very good Chianti from a wine list full of tempting Italian numbers at fairly reasonable prices. Gusto continues to be a cut above most, and I'm crossing every digit I have that their traditional 50%-off-food will be on in January, when I plan to dine on whole salt baked sea bass every single night. 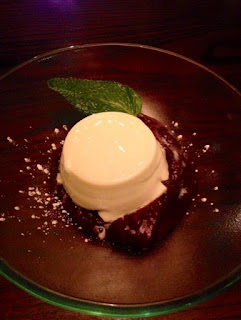 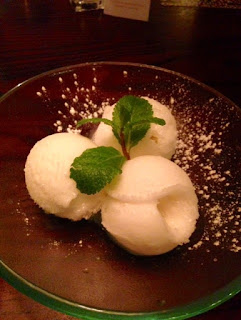 - Gusto Didsbury is at 756 Wilmslow Road, Didsbury M20 2DW. We were invited to review the new menu and were not asked to pay for our food or drink, but I'm a regular here to the point of embarrassing levels of recognition from the staff.
Posted by Liz at 12:18 No comments: Links to this post

There are all sorts of things clamouring for our attention at any given time. Restaurants come and go; pop-ups spring up everywhere you look; street food continues to flourish; and every week seems to see the launch of at least one new bar in the city centre. So any event that keeps people coming back year after year is something to be applauded, particularly if it permits one to sample hundreds of wines in the rarefied atmosphere of Manchester Town Hall; indeed, I can think of few things besides the Three Wine Men Manchester Christmas Tasting that would see me boarding a tram at 11am on a Sunday morning and heading off in search of a nice glass of red. 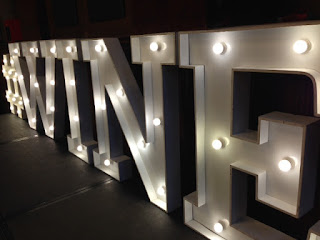 Three Wine Men is, for me, one of the best days of the year. Hosted every year by Tim Atkin, Olly Smith and Oz Clarke, it would be easy to be cynical about the branding - you're invited, for example, to take a test to see with which of the three you most share your wine tastes, complete with a sticker to wear (terrifyingly, if you end up liking the same wines as Olly this means liking "wines as exuberant as riding a unicorn by the horn all the way to the gates of Guzzle City", a trip I'd be keen to avoid, even to the extent of paying an Uber surge). Too much cynicism would rather miss the point though - this is simply a happy, joyous affair where, in exchange for £27.50, you get to merrily weave your way round the Town Hall, sampling lovely wines at will and getting to talk to some of the small producers and stockists who often don't get much of a look-in.

One such company is Alpine Wines (pictured below), who are just lovely and from whom I end up buying every year - this year, the lovely Grüner Veltliner "Mitanaund" from Elisabeth Hausgnost. In fact, for me the Reislings and the Grüners were the stars of this year's show, with some excellent examples at GK Wine House (as personally recommended by Olly Smith who - as usual - asked after my mother, whom he met for about three minutes about three years ago). 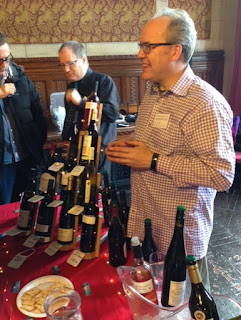 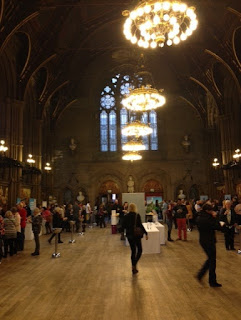 I shall also remember 2016 as the year I was finally converted to Sherry, a drink of which I have always been a little suspicious. Whilst I can't claim to have liked all of the Sherries on show at the Sherry Wines stall (Tio Pepe Fino still has too much of a whiff of old ladies in bed jackets about it for me), I did enjoy most of them, particularly the Manzanillas and the Oloroso. In fact, I did so well and was SO brave that I was allowed my badge for achieving the Sherry Challenge despite some rather undignified retching of the Tio Pepe into the spittoon. 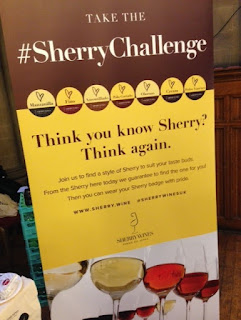 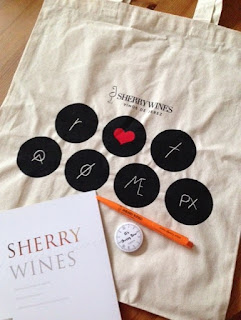 I avoided most of the big name stalls simply in the interests of time - the whole point of Three Wine Men is to try wine you perhaps wouldn't come across on the high street. That said, who could resist a chat with the lovely Dave Marsland (aka Drinks Enthusiast), on hand to represent Warner Edwards Gin (try the rhubarb one - it's wondrous) and seen below in one of his typically unassuming, camera-shy poses. I also very much liked the wines chosen to represent the International Wine Challenge, an annual award that recognises outstanding wines regardless of their cost - some of the 2016 medal winners on show included the lovely Greyfriars Vineyard Blanc de Blancs 2013 (I'm a sucker for an English sparkler) and a very good Tempranillo from Asda that comes in at under six quid. 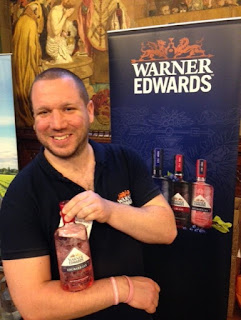 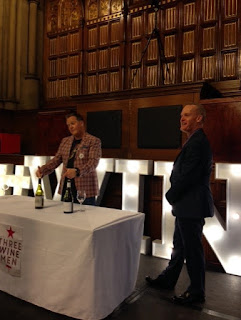 All too soon, our time was up - three hours fly by here, and we had to make way for the good folk thirstily arriving for the next session. The only rogue note of the day? The three wine men were being filmed for a TV show, and as I was standing in the wrong place at the wrong time there is a worrying chance I'll soon be on a TV screen near you, swaying slightly and pretending to listen to Oz Clarke as he talks to me about something. Still, potential public humiliation aside, I'm already looking forward to the next one.

- Find out more about Three Wine Men here on their website. I was given complimentary tickets to the event, but spent approximately three million pounds on wine and would happily go (and have been) as a paying customer. 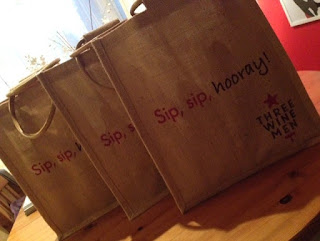 Posted by Liz at 12:17 No comments: Links to this post