First things first: despite having quite a lot of friends who live in Bolton, I am woefully ignorant of the merits of this particular town and its environs. Thus I have to trust their judgement (and point the finger of blame squarely their way if this offends anyone) when I say that the news that Westhoughton, some four miles southwest of Bolton, had a more-than-decent restaurant, with an excellent young chef and a menu full of British classics, was not immediately thought to be credible when the invitation to its new menu tasting arrived a few weeks ago. In fact, some went so far as to suggest that "fine dining" and "Westhoughton" were not words that naturally collocate.

And yet it is indeed so; in fact, on the evidence of last week's preview, Provenance is far, far better than even the most open-minded Boltonians of my acquaintance could ever have dreamed. For one thing, it has a most excellent food hall on the ground floor, full of things I would like to eat. Fortunately for my bank balance this had closed for the evening, but I had a quick roam around and made a mental note of essential future purchases (by which I mean, essentially the whole shop). For another thing, the head chef Lewis Gallagher was awarded North West Chef of the Year in 2012 and went on to be runner up in the national competition, as well as winning Lancashire Young Chef of the Year twice in succession. And if that wasn't enough, Provenance have got themselves into the Good Food Guide 2017, after just one year of trading. All of this boded most auspiciously. 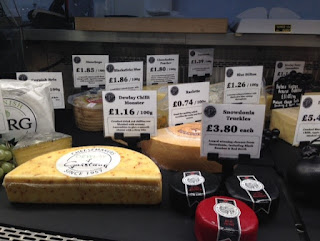 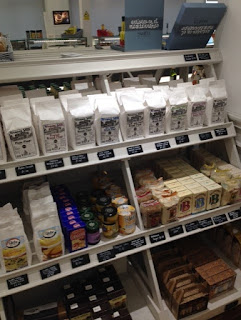 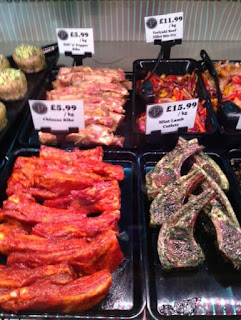 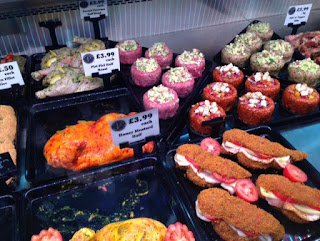 We started off with a platter of miniature versions of dishes from the forthcoming Christmas menu: goose rillettes, beetroot gravadlax and black pudding with apple. All of these went down a storm but the black pudding was probably the favourite across the table, certainly going by the evil looks that came my way when it transpired that my date for the evening didn't like black pudding and was in need of someone to eat hers on her behalf. This was followed by an exquisitely velvety pumpkin soup, which was widely decreed a proper taste of Autumn and equally widely devoured despite it being pretty much the hottest day of the year; I particularly liked the contrast between the rich smoothness of the soup and the crunch of the toasted seed topping. 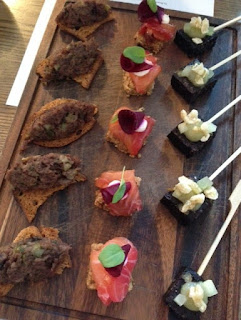 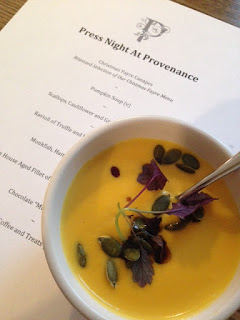 Next up was a big fat scallop, briskly seared and served with some sharp Granny Smith apple and different textures of cauliflower. Rather excitingly, the apple had been vacuum packed and had its juice forced back into it, resulting in joyous, refreshing little bursts of flavour to complement the already varied textures of the cauliflower. The ravioli of truffle and Jerusalem artichoke that followed was initially met with a little suspicion, with some of us worrying the truffle would be overpowering and pretty much all of us wondering where the sauce was. We should, of course, have had greater faith - the pasta, filled with ricotta cheese and lightly drizzled with oil, was more than moist enough on its own, and boasted beautifully subtle notes of its bolshier ingredients (the chef clearly has more self-control than I when faced with a dish calling for either artichokes or truffle). 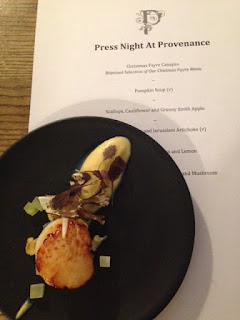 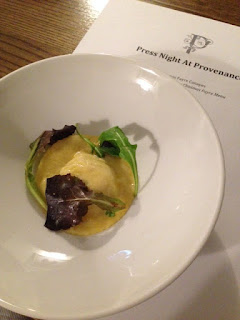 On to the two larger courses of the tasting menu - monkfish with a chorizo crumb, crisp ham and a lemon sauce, followed by fillet of beef with onions and mushroom - and both an absolute knockout. One of the most impressive aspects of Provenance is its focus on traceability (hence its name), and nowhere is this more visible than in the in-house ageing facilities, responsible for both the beef (which cut with ridiculous ease) and the ham. Another obvious strength is the sauces - the lemon sauce was brilliantly tart and very brave in its full-on citrus flavour, whilst the onion sauce that accompanied the steak was rich and smooth and sweet, and forced me to run my finger over my plate with a complete lack of dignity (although to be fair, the sauce does perhaps not look completely dignified itself). 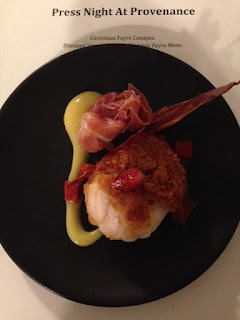 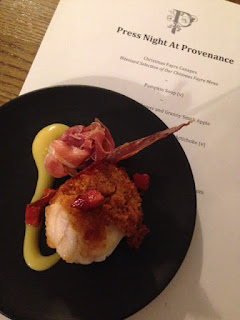 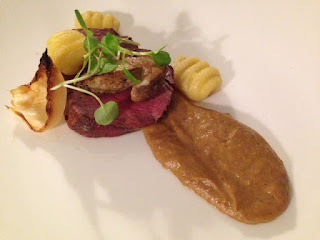 The dessert course had got us all wondering what a chocolate "mushroom" might be, and visually this didn't disappoint. Chef Gallagher is quite rightly very proud of this dish, which was chosen as the dessert option at the Gala Dinner at the recent Bolton Food and Drink Festival, and whilst this was my least favourite course of the evening (I don't really care for chocolate-flavoured things), the clever combination of textures (think chewy meringue, soft ice cream, crisp chocolate shards etc) was a massive hit at our table. Similarly, the violet macarons that finished the meal weren't really for me - the texture was perfect but the flavour just too Parma Violety - but were wildly popular elsewhere, with one blogger successfully eating three before being captured and dealt with by the authorities. 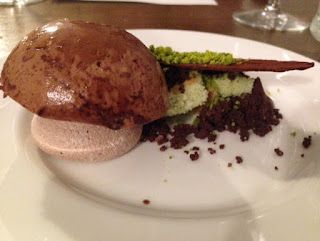 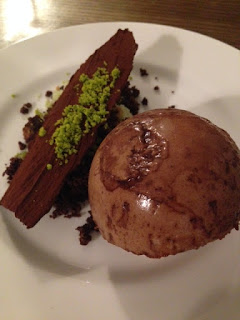 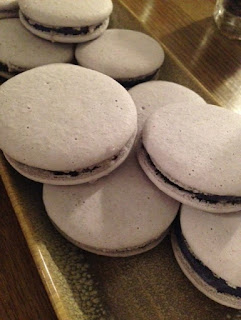 Any downsides? We thought that the prices - which are essentially the prices you would find in central Manchester - might be a little steep for the area, although in my opinion the quality of the food justifies the pricing and in any case, there are plenty of fixed price menus and offers available (I am already eyeing up the Wednesday night Grill Nights). The only other downside was a small, personal sorrow - I live a long way away from Westhoughton, and therefore had to forgo the wine that flowed so generously throughout the evening. This aside (it's hardly the owners' problem that I live elsewhere, particularly as the restaurant is rather romantically located in the premises of the old family toy shop), I can't really fault Provenance. I shall certainly be back - and next time, I'm taking a shopping bag (and a credit card).

- Provenance is at 46-48 Market Street, Westhoughton, Bolton, Lancashire, BL5 3AZ. This was a free event but I have already made plans to go back.
Posted by Liz at 13:05 No comments: Links to this post

Facebook Memories can be a bit of a mixed blessing. Some days it throws up lovely memories, and reminds you of much-loved friends, and splendid nights out; sometimes, the memories are things you might perhaps rather forget, or reminders of quite what a greedy girl you really are. My own account is keen to remind me, for example, that four years ago I was seemingly a regular nuisance at The Mark Addy, where the wonderful Robert Owen Brown would rustle up six courses of unmitigated joy, the odd foray into brains or testes excepted, at his monthly Gourmet Nights; the menus serve as a constant reminder of how much I miss those nights.

Fortunately (well, for me, not so much for the wildlife of Greater Manchester), we can still enjoy Rob's distinctive menus via his semi-regular supper clubs in partnership with Inca Pop Ups, the most recent of these being last week at Ancoats Coffee House. I've been to pop up events at this venue before and it works really well for supper clubs - it's friendly, and has sexy brickwork, and sociable seating, and a generous bring-your-own policy that I applaud most heartily. And, of course, it's always a pleasure to see Rob. Here's what he cooked for us this time (and fear not - there's nary a bollock in sight):

Wild mushroom soup with summer truffle. Rob does a good soup, and this was one of his very best - rich, smooth and earthy, with a proper hit of truffle. Everyone loved this. 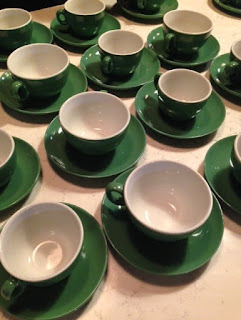 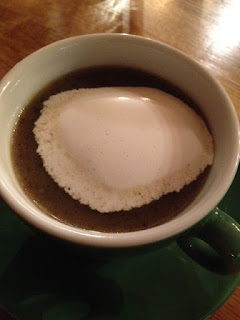 Pressed smoked duck, with raspberry vinegar emulsion. Another winner - I love duck in all its forms, but it is a meat that smokes particularly well, and went well with the sweetly tart dressing. And yes, I've now got an image of a duck in a velvet jacket smoking a cigarette in a long holder. 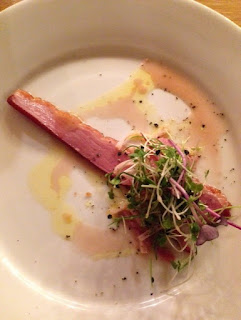 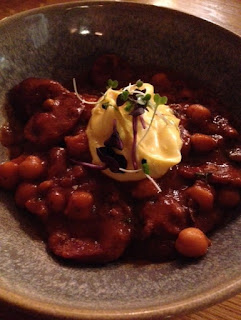 Octopus, heritage tomato, Yorkshire Chorizo with garlic & saffron mayonnaise. Genuinely one of the nicest things I have eaten this year - a really meaty, flavoursome stew completely brought to life with a big dollop of really garlicky aïoli and some nice crisp toast to dip in it. We didn't really share this very nicely on our table, and truth be told we found our portion of one medium and one small bowl between four a bit sparse. If the boys had had pistols, I think they would probably have duelled over the last piece of octopus (which, obviously, I ate - just to alleviate the tension). 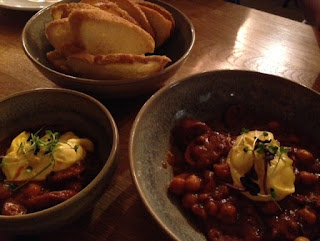 Butter-roast free range guinea fowl, with candied honey, lemon & lime. Well, it wasn't guinea fowl but chicken; Rob had apparently been let down by a well-known butcher, although I know better than to comment on this. The meat was lovely - moist flesh (a phrase I don't type that often, thankfully), and the most perfectly crispy skin (again, likewise). The vegetables were beautifully cooked and the light jus brought everything together with exemplary cohesion; we did all feel the mashed potato was a little bland though, and could have stood a little more seasoning. 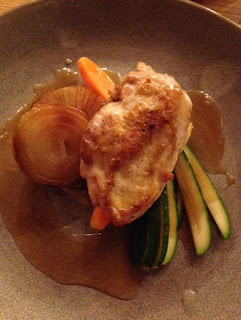 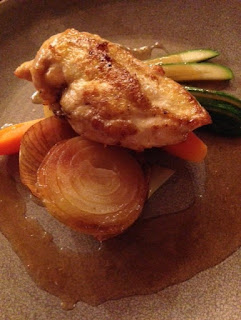 Classic summer pudding with vanilla ice cream. I wasn't initially that excited about this one, as summer pudding isn't my favourite dessert, and I can take or leave ice cream. I should have known to trust Rob though - the whole dish was stunning both in taste and presentation - and just look at the dinky little ice cream! Look!! 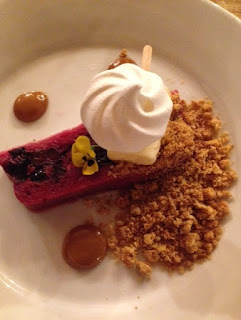 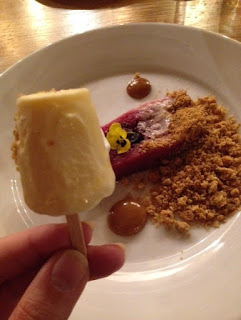 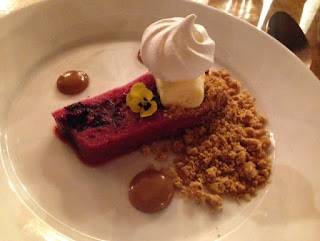 All in all, this was great value at £35 for food of this standard cooked by a chef of such high repute, particularly as taking your own booze keeps the costs down anyway. Do remember to factor in though that Rob will make you buy a copy of his excellent book, even if you already have a copy. You can catch him and Inca Pop Ups again at the Manchester Food and Drink Festival with an Edwardian-themed supper club on Saturday October 8th - more info and tickets here. And as there's cheese soup and lobster on the menu as well as a chance to dress up, you'll very probably see me there.
Posted by Liz at 10:31 No comments: Links to this post