There are certain events in the Mancunian calendar that I consider to be totally unmissable. Didsbury Beer Festival is one of them, and whilst beer festival cynics (and it saddens me that these people even EXIST) may claim that such an event is essentially a cold, drafty tent full of people of a certain age wearing anoraks, I would like to temper this slightly by pointing that the tent is practically on my doorstep and is filled with lots of lovely beer and that, actually, that's a pretty nice coat I'm wearing. This year's festival is, unbelievably, the 7th; I have attended them all except one, and it was a pretty major trauma that kept me from going that year - the embarrassing number of Didsbury Beer Festival branded pint glasses in my kitchen bears (beers?) testimony to my devotion to this particular cause. 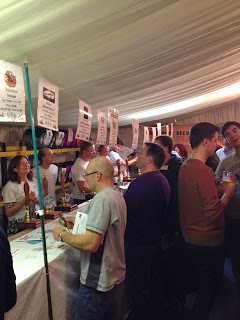 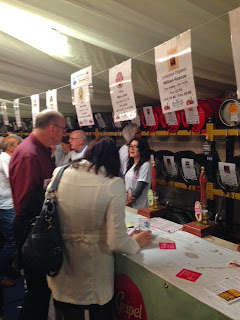 Last night was the first of the three-day festival, and I paid a flying visit to sample a couple of ales and conduct a bit of a recce ahead of a more serious assault on the Saturday sessions. There seems to be more beers than ever, many of them local - I had a half of Ginger Marble from Manchester's Marble Brewery (I always start with this as it's one of my favourite ever beers: a big, spicy, swaggering beered-up version of the cockiest gingerbread man imaginable) and then a half of Funky Banana from Holmfirth's Nook Brewhouse (terrible name; great beer - light, refreshing and slightly sweet). 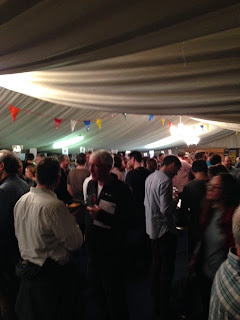 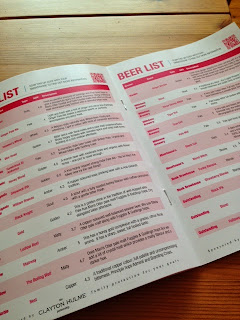 The festival is on again tonight between 6 and 11pm (entry £5) and tomorrow between 12 and 5pm (£3 entry) and 5 and 11pm (£4 entry). There is live music both nights and always a lovely atmosphere - it's also obligatory to have a portion or two of chicken curry and chips from the legendary St Catherine's hatch in order to soak up all that beery goodness. The full beer list is available on the DBF website and there is also a pretty good selection of ciders and perries for anyone who didn't make themselves ill on cider for their 18th birthday and not been able to face it since. I will be spending my time until Saturday afternoon persusing my copy of the beer brochure and idly circling the ones I want to try whilst pondering my generosity - over the last six years Didsbury Beer Festival has raised over £75,000 for local charities. This year's deserving causes are Visioncare and The Wellspring, both offering help to homeless and other vulnerable members of society - so really, it's our duty to go along and drink beer. See you there...

Ah, Autumn. Yes, the sudden drop in temperature has been a bit of a shock, and no-one likes getting up in the morning while it's still dark - but there's still much to be welcomed in a season that allows you to pop the heating on, open a bottle of red and bring a blanket downstairs to put over your knees while you watch Strictly. You may have noticed from the lack of blog posts recently that it takes quite a lot to get me out the house at this time of year, but there are a few occasions looming on the horizon that I will make an exception for: Didsbury Beer Festival (more of which next week), Hallowe'en (if only to avoid the constant knocking on by trick or treaters) and Bonfire Night (the cat has assured me that if I pour him a small brandy before I go out he'll be fine on his own).

To celebrate two of these three auspicious occasions (I'm sure it will only be a matter of time before they create a special pie for Didsbury Beer Festival), Holland's Pies have sent out some recipes to promote their new limited edition seasonal creation. Now last time I wrote about this famous Lancashire firm I got some stick from certain quarters, but I care not - I love a pie, and as I generally can't be bothered to make my own I'm more than happy to eat one that I've located in the freezer. The new one sounds good, too - the ‘Ghoul-ash Pie’ has been created exclusively for Holland’s by celebrity chef Tom Bridge from The Great British Bake Off and features beef and paprika. For Bonfire Night they recommend the good old Potato and Meat pie and suggest you serve it with mushy peas - recipe below. You can even share your Hallowe'en or Bonfire Night photos on their Facebook page or Twitter feed for the chance to win either a Ghoul-ash Pie or a Bonfire Night party pack containing a Holland’s pie cosy to keep your pies warm (this is not normally an issue for me), hand crafted Holland’s mittens (I need these desperately) and a batch of Holland’s Potato & Meat Pies (ditto). 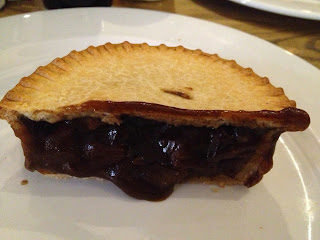 So, I'm happy to pretend that I'm off to some glamorous bar launch, but in reality I'm here in my pyjamas, eating a dish of mushy peas and planning which real ales I'll be going for first next week - and all the happier for it.

Soak the dried marrowfat peas the night before cooking in a bowl of cold water. The next day, rinse the peas under cold running water and place into a large saucepan. Add boiling water to cover the sugar and salt and freshly ground black pepper, to taste. Boil gently for about 20-30 minutes, or until the water has evaporated and the peas have turned into mush.
Posted by Liz at 12:56 No comments:

Harvey Nichols Manchester Taste on Two: Christmas is A-Coming and the Blogger is Planning to Get Fat

One of the very nicest things about the run up to Christmas is the sudden proliferation of lovely things in the shops. Suddenly it seems like an excellent idea to pick up a small sequinned shrug, which admittedly offers no protection against the Mancunian elements, and team it with a sparkly hairgrip or two and an oh-so-cute bag which is too small to actually carry anything but which will be just right for any party one might get invited to.

And the Christmas food is even better. Monday evening saw the Taste on Two event take place at Harvey Nichols Manchester, a mini festival to showcase some of the goodies to be found in this most tempting of food halls - and whilst not specifically a Christmas event, I sampled many things that I can confidently say will contribute to my annual festive weight gain. Being Harvey Nics, the evening started with a cocktail and, more unexpectedly, the tying on of a rather desirable Harvey Nics apron, causing me to fear an imminent involvement in some kind of butchery class that thankfully never came. Instead, I wandered round a selection of tasting tables trying out a number of premium food and drink items, including Joe & Seph's amazing gin flavoured popcorn, Yee Kwan Ice Cream, Booja-Booja truffles and Manfood boozy jams (which I heartily regret not buying a truckload full of). 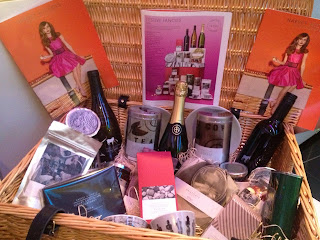 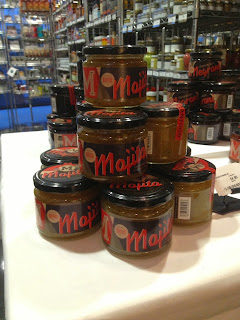 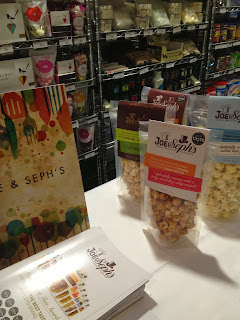 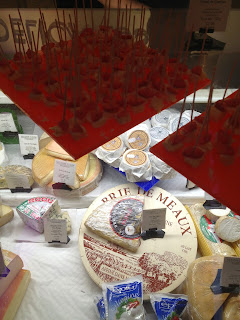 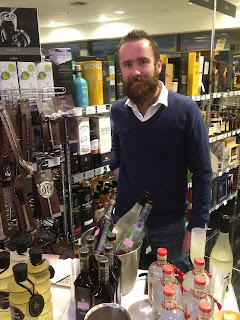 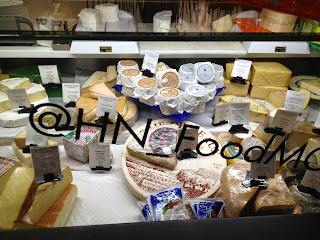 We also enjoyed demos from Tickety Brew, Woodall's Charcuterie (with cheese matches from Burt's Cheese), Harvey Nichols Wine Shop and Grey Goose Vodka, who showed us how to make three different Martinis and then - even better - permitted us to neck them. I had to drink a very great deal of both the wet and dry Martinis in an attempt to find a preference (the difference is in the amount of vermouth added) and still can't be completely sure without further testing. 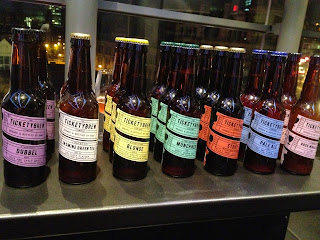 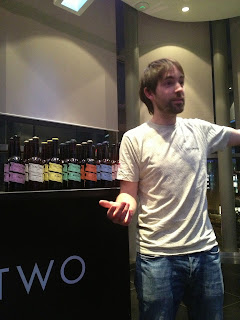 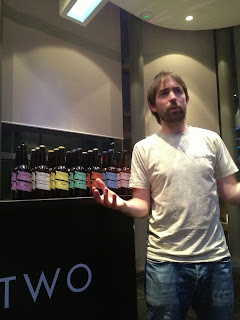 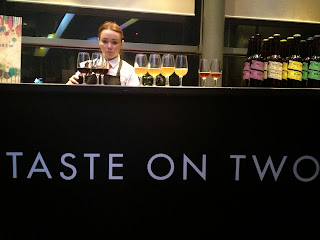 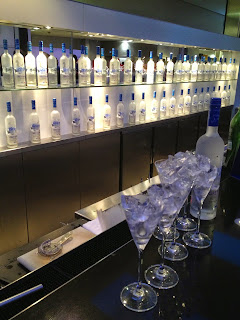 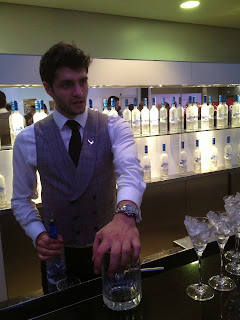 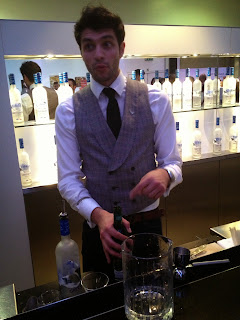 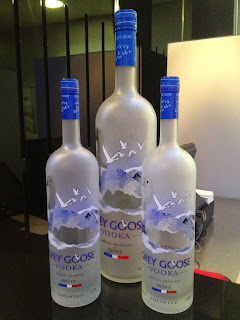 At the end of a splendid evening I left clutching a quality goody bag which - along with the apron and the generous food and drink samples - made this a great value event at £15 a ticket. A lovely night - and I'm hoping to find more than a few of these choice items under my Christmas tree come this December... 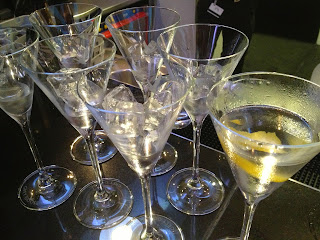 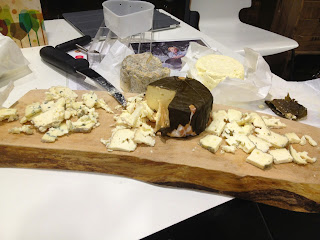 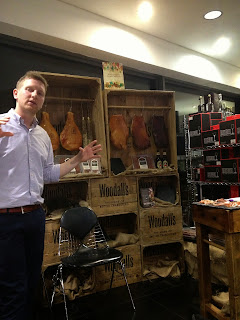 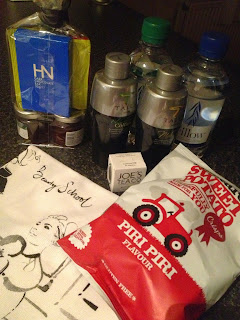