I love Manchester. I may not have one of those posters in my window proclaiming my allegiance, but that doesn't mean I don't heart my adopted home town; Mr Liz never ceases to be amazed that I left God's own cider country in order to live amongst its smoky turrets and red brick palaces.

And yet, even the most ardent of Mancunians has always had to admit that not all parts of the city centre are as beautiful, striking or salubrious as their glitzy, show-off cousins just a stone's throw away; the contrast between the breathtaking juxtaposition of old and new in Exchange Square, for example, and the tiredness of the once-thriving Ancoats (although ANY area name-checked in Matchstick Men and Matchstick Cats and Dogs can't be all bad) makes it all too clear that some places in Manchester are more equal than others.

At least, this used to be the case. Recent years have seen plenty of areas of Manchester and Salford move from skank to swank (sometimes seemingly overnight, but then I'm not always very observant) - Salford Quays, with its glorious theatre, art gallery, museum and now big shiny lovely Media City thingy is a case in point, and the Northern Quarter, while still undeniably a little rough round the edges, is now one of my favourite places in Manchester for a night out, thanks to its mix of interesting independent businesses and its complete lack of loud, orange, WAG-y types.

And so to Spinningfields. It seemed uncertain that this previously unloved area of Manchester would ever really catch anyone's attention - you either didn't know it was there, or didn't care, or only vaguely registered its presence as you hurried past to get the Mark Addy. Shallow as I am, the reason for my initial antipathy towards the area is clear from the most cursory of glances at the Spinningfields website, which proudly proclaims it to be "Europe’s new premium financial and professional services destination"; well yes, all well and good, but sadly you may as well say "blah blah blah blah" to me instead for all the interest I have in financial and professional services.

Now, however, I AM interested in Spinningfields, for it is suddenly full of places I want to go. Australasia, with its faux-Louvre glass entrance, may have gathered mixed reviews, but it has certainly attracted plenty of press attention for its glamour and presumption; Southern Eleven has had people physically weeping over the beauty of its American BBQ ribs; and The Alchemist certainly knows how to serve after-work drinks in style.

To this increasingly impressive list can now be added The Oast House, yet another outpost for the seemingly tireless Tim Bacon of Living Ventures, and looking like yet another success. This is the first pub for Living Ventures, and is of course no ordinary pub; as with so many things, until you've seen a gorgeous little Alpine-esque chalet spring up in the middle of a shopping precinct, you never really realised how much you wanted or needed one. Certainly the place looked beautiful for its launch party on Thursday, decorated with hundreds of twinkly-mouthed pumpkin heads and with plenty of comfy sofas strewn with tempting furs that my cat - if invited - would have been loathe to leave. The Oast House is a temporary structure with a two-year licence, but feels so snug and sturdy that it is quite easy to imagine locals gripping on to its foundations and wailing "no! you mustn't take it away!" when its tenure is up. 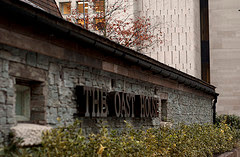 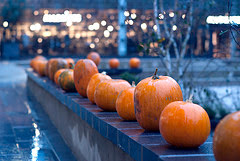 The selection of alcohol on offer is impressive, with around 40 different bottled beers and ciders from around the world (during my evening I only managed two places, Brazil and Italy, so clearly I'm going to have to go back and continue my tour) as well as draught and cask ales (these included Thornbridge Jaipur, Redwillow Smokeless and Loweswater Gold the night we were there - as you would expect from a place that takes its name from a building used to dry hops, there is a strong beer presence here). Foodwise, they will be offering a deli-style menu of cheese boards and the like (I pray to the food gods above that some form of the Stilton tart canape I ate ten million of appears on this menu at some point) and - even more excitingly - an outside barbecue that they promise will laugh in the face of the impending Mancunian winter. 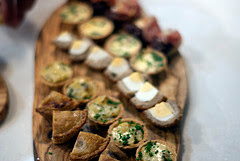 Any down sides? Well, after a few drinks I did find the toilet door handles difficult to operate (you'll see what I mean), but I am prepared to admit this may be a failing on my part rather than the venue. Does Manchester need another pub? Maybe not, but The Oast House does offer something a little bit different, and I for one am already picturing myself sailing elegantly round the soon-to-appear Spinningfields ice rink (in my imagination I am an excellent skater, rather than alternating between sitting on my bottom and holding on to the edge with grim determination) before skipping, rosy-cheeked, for a cheeky mulled wine at The Oast House. 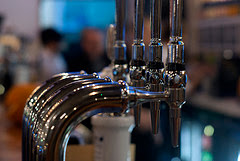 PS...you may have noticed that the photos today are of an, ahem, slightly higher quality than perhaps normally appears on these pages. You may admire more of this talented man's work here - he's not quite mastered the art of "photographing a pear in the dark" yet, but he's working on it.
Posted by Liz at 01:30