The Joy of Pork: an Evening of Piggy Goodness with DineInOut and The Drunken Butcher

Now, ANY event that has an amazing name runs a serious risk of not living up to its title, of bringing nothing but disappointment to its attendees. So when I booked my places on DineInOut's Joy of Pork evening, I was both excited and slightly trepidatious about what the night might bring: a man who makes sausages for a living suggested a glass bowl might be provided for the exchange of car keys; a linguistically-minded friend enquired, bravely, whether this was "pork" as a noun or a verb; other, less-linguistically minded friends merely sniggered and tittered.

Anyway, I'm pleased to confirm that last night's porky celebration was a good one, with not a glass bowl in sight and porcine goodness provided only in its noun form. The evening was hosted by Iain Devine - aka The Drunken Butcher - at his home in Sale; as you've probably guessed by the name, DineInOut arrange nights of restaurant-quality food cooked and served in the chef's own house. You pay a deposit and an envelope is then passed round at the end of the night for further contributions, an idea I plan to introduce at my own gatherings, for whilst my friends invariably turn up with excellent wine I can't help noting that no-one has ever actually coughed up any cash money. Still, I can't lay claim to ever having provided anything like the following for my own dinner guests:

Welcome drink of prosecco, whisky and cherry: a sweet, sparkling affair that I noticed all the boys in attendance drank eagerly despite its alarming pinkness.

Amuse-bouche of chicharrons (fried pork rinds) & chilli, and pork cheeks with soy: these did indeed amuse my mouth most pleasingly, particularly the dark, sticky pig cheeks. 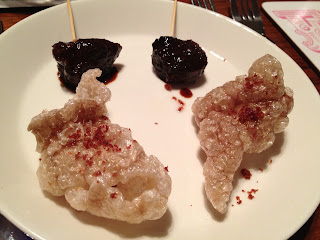 Starter of torchon of pig's head, served with cherry sauce and mustard: I always try to eat pig head as often as possible, simply due to the fact that the very MENTION of such an item sends a particular friend into apoplexy, and this was delicious. As far as I can ascertain, a torchon is a dish cloth in French and refers to a method of cooking foie gras, so I am unsure how this relates to the delicious crispy disc of tenderly pulled meat we were given; I would have asked Iain, but he was making menacing noises with knives in the kitchen at the time. 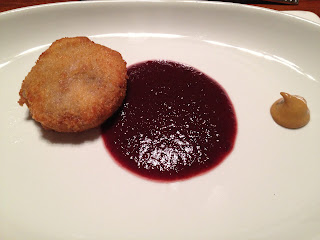 Main of roast T-bone and loin of pork served with roast potatoes, cauliflower gratin and rosemary & thyme gravy: ah, turns out those knives were to carve us this little pile of piggy joy - the platter you see here was for just four of us. The crackling was spot on, the loin was moist and tender and the gravy was perfect - I would have liked an extra vegetable item such as plain cabbage to cut through the richness but others simply scoffed at such blasphemy, so that's obviously just me. I ate all of my cauliflower gratin and then all of someone else's in a show of greed most unlike me, so that just shows you how good it was. 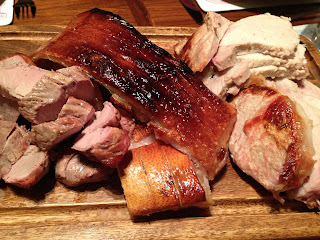 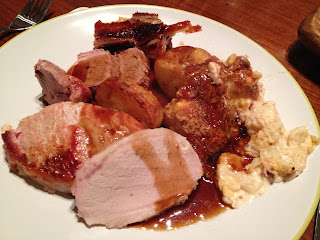 Pudding of spiced plum and raisin soup served with cinnamon ice-cream: or, as the wise Lady Sybil so accurately described it, mulled wine soup. This was suitably light after the preceding pig mountain, and I could have eaten more of the lovely cinnamon ice-cream that melted so luxuriously in the middle of its fruity ocean. 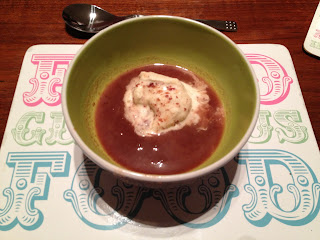 Finishing dish of homemade Oreo cookies served with a Jim Beam milkshake: every bit as good as it sounds. I'm not keen on Oreo cookies but these were a revelation and far, far nicer than the shop-bought variety; the accompanying milkshake was thick and sweet and good, particularly for a canny Mr Liz who had appointed his loyal wife designated driver and was helpfully on hand to drink her Jim Beam for her. 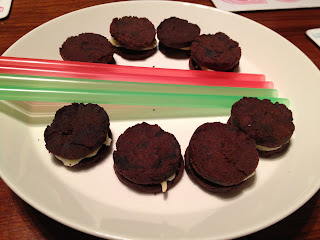 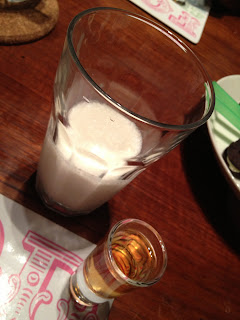 The DineInOut evenings are BYO, and tap water is provided for those who have drawn the short straw in the ongoing whose-turn-is-it-to-drive argument. This makes them excellent value, particularly as Joy of Pork was ours for just a £10 deposit each and then a further minimum donation of £10 each on the night (we chose to pay more). Iain made for an excellent chef/host, proving particularly adept at wielding knives whilst plying guests with drink, Tania from DineInOut was on hand all night to chat, top up the glasses and generally keep the evening running smoothly, and it goes without saying that the company on the night was superlative. There are more events planned for the DineInOut/Drunken Butcher partnership (and I hear a rumour there might be one place left for tonight's Joy of Pork if you're quick) - you can book via Eventbrite here. And having heard some of the names for events in the pipeline, I can forsee more smut ahead, particularly for the chicken night...
Posted by Liz at 02:15

We are going tonight - and am now very excited!

Have a great time, and do not - repeat NOT - eat before you go!

Thank you for all your wonderful comments about the Drunken Butcher - I take just a little pride in the fact that I taught him to cook proper crackling, but then I'm his Mum!