Eagle-eyed readers may recall detecting the smallest smidgeon of disappointment (hastily and professionally concealed, of course) when I was unable to attend the opening of the new Alchemist on Manchester's New York Street: early reports suggested that this was a splendidly sparkly new venue with all the charms of its Living Ventures sister Alchemist at Spinningfields (interesting and innovative cocktails, well-judged soundtrack, buzzy and convivial atmosphere), only in a bigger, better, no-bottle-neck-at-the-bar-when-really-busy location. You can read roving reporter Olivia's verdict on it here.

On Wednesday evening, however, it was all about the food. If you've already eaten at the Spinningfields venue, you'll know what to expect from the menu, which is essentially a slightly frantic dash around the world's cuisines - a sort of "best of" collection of global comfort food. This is the kind of eclectic approach which can cause great dismay when attempted at a fine-dining venue, but is a real strength somewhere like the Alchemist, where eaters are likely to be a group of sociable souls on a cheery night out, all fancying different food items with which to mop up their exquisite cocktails. That's not to say that the food here isn't good - it is; it simply doesn't pretend to be anything it's not. Here's what we had, and here's why we liked it:

Starters: we over-ordered here, as we obviously had to try the calamari (Mr Liz's starter of choice, wherever he goes), but also really fancied the Bar Snacks Platter offering chicken wings, nachos, potato wedges and beer battered prawns with dips for £10.95. Were these high-end, carefully constructed, dainty affairs? No. But everything was good - hot, salty, tender calamari; crunchy puffs of batter enclosing steamingly juicy prawns; nice sturdy potato wedges; hideously moreish wings spiked with chilli, salt and pepper. The surprise hits, though, were the nachos - smothered in sweet, cheesy goodness to the point of saturation. You KNOW you're looking at a good plate of nachos when you can't find a single naked corner to grasp hold of. 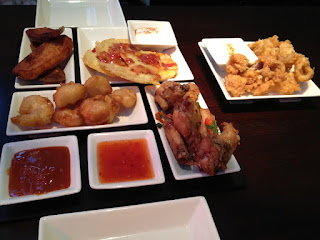 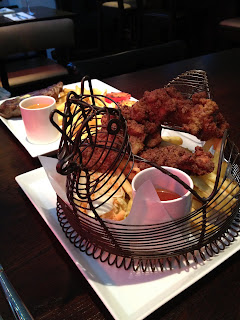 Mains: now, I've deliberately not read it yet, but I hear a well-known Manchester reviewer was less than impressed recently with the Special Fried Chicken in a Basket offered at The Alchemist. Personally, I can't really see how anyone could fail to enjoy a dish of chicken in a basket, that comes in a basket shaped like a chicken - the pleasing nature of this kind of amusing symmetry is surely irresistible, particularly to someone born in the 1970s and therefore brought up on a succession of far less ironic chicken in a basket dishes. The chicken was blisteringly hot, in a crispy coating that clearly contains some kind of habit-forming substance in the light of the chicken cravings with which I awoke the following day. There were too many chips, and the accompanying coleslaw was a bit on the bland side for my taste, but the chicken was magnificent; I am seriously worried that any glamorous, elegant cocktail evening I ever attempt here will always be significantly derailed by a moment of chicken weakness at approximately 10.30pm - I may resort to carrying one of those moist towelettes on my person at all times. Mr Liz went for the Rib Eye Steak Frites - a hefty slab of 28 day aged meat cooked perfectly to order and served with (too many) chips and some nicely creamy peppercorn sauce. This was £15.95; the splendid chicken basket just £9.95 - not to enjoy it is to miss the point. 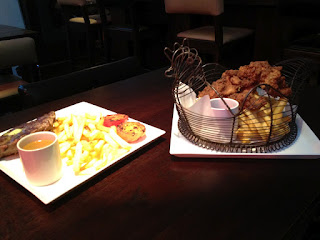 Dessert: we shared a pud, and there was only ever one choice in contention - the Belgian Waffles with cinnamon, sugar and vanilla ice cream at £3.95. These were seriously good, and plenty big enough to share, even with one of the sharees being Mr Liz. It would also have been rude not to try a couple of the famous cocktails whilst we were there - the Porn Star Martini with its sidecar shot of Prosecco was perfect (although to be fair, it should be at £10 a go), and the Dry Iced Tea, served in a teapot spewing out a plume of dry ice, was as exciting as ever. And with the food coming in at under fifty quid for both of us, we felt entirely justified in a glass of wine and a couple of beers as well. 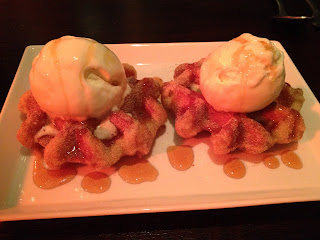 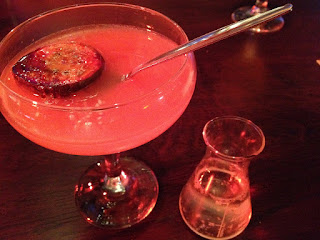 So whilst the Alchemist NYS doesn't really break any earth-shattering new ground, it continues a winning formula. And if the number of people here on an anonymous Wednesday night is anything to go by, the newest member of the Living Ventures stable looks set to continue the success as well. 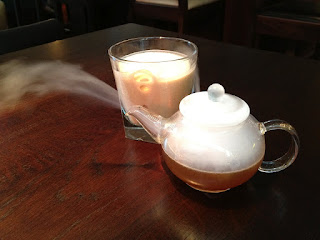