As previously discussed, there are certain words in the English language that quite naturally collocate; in other words, they go together, like bacon and eggs, salt and pepper, and cheese and anything. Then, a pair of bold young bar consultants going by the name of The Liquorists dared to put two words together in a thrilling new combination that has literally been stopping people in their tracks when they hear it for the first time: GIN and BARGE. Yes, that's right, a Gin Barge this weekend set sail on Manchester's fair waterways, packed to the gunnels with cheery folk frankly over-the-moon to be plied with strong liquor at one o'clock in the afternoon - but more of that later. 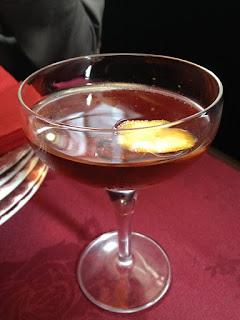 The day, snappy entitled "Gincident" (a blend which pleases the English teacher in me as well as the alcoholic) begins with a marvellous sight - the jaunty L.S. Lowry barge making its way into the Castlefield Basin, with Tom - one half of The Liquorists - standing gloriously astern and waving in a jubilant, I-have-a-ship-full-of-gin-here manner (the other half of the dynamic duo, Jody, was presumably inside doing the actual work, making our lunch and supervising the welcoming G & T that greeted us as we boarded). As well as this warm-up drink, over the course of the three-hour cruise (basically down to The Mark Addy and back again) we received ALL of the following:

- Clever, educational stuff from Tom. Whilst the admirable on-board barman whipped up our drinks, Tom told us all about gin, its history, and the cocktails which we were about to receive (and for which we were indeed truly grateful). In the wrong hands, such talk can be merely something you tolerate whilst impatiently awaiting your next beverage, but Tom is funny, and engaging, and completely able to continue with his spiel even when faced with a hen party wearing large, bushy moustaches in his direct line of vision. A true professional. 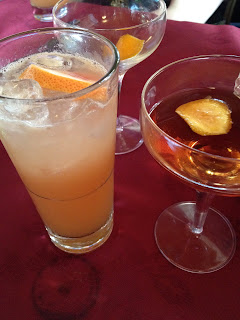 - Five gin-based cocktails. Yes, five full-sized, full-strength cocktails IS a lot for an afternoon, but in the same way that calories don't count if you eat standing up, alcohol units don't count if consumed whilst on water*.

The drinks we had are artfully dotted around this luxuriously gin-soaked page; they were brought to us at our table at regular intervals, and comprised the following:

1. The Martinez, the forerunner of the Martini - deliciously strong and sweet but quite astonishingly unsuitable for a girl who is rubbish at afternoon drinking. Luckily, I was able to swap it with one of the moustachioed hens for something else.

2. The Singapore Sling, a refreshing and sweet contrast to the preceding drink, with its jaunty combination of pineapple juice, Benedictine and, erm, gin.

3. The Bramble. EVERYONE loves a Bramble: this was LUSH.

4. The Gimlet. One of the hens disliked this, because it "tasted of gin". Not surprising really - it's gin, lime juice, gin, and some more gin.

5. The Marmalade Collins. I'd never tried this one before; it turned out to be a long, refreshing, sweet-yet-tart affair. I also feel it would make an excellent breakfast item, due to its citrus spread-based content. 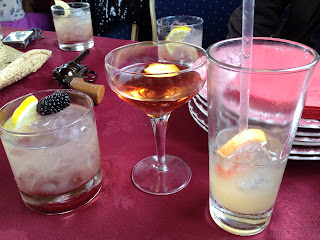 - In the midst of so much booze, a large, soaky-up sort of repast was clearly called for if we weren't to slowly, helplessly, topple overboard like inebriated lemmings. Now, you'd think that preparing such a feast - in a four feet square kitchen whilst bobbing along the Ship Canal and being heckled by a number of people baying loudly for gin - would be an impossibility: not so. Plate after plate of delicious cold buffet items appeared one by one at our table - salads, couscous, potatoes, pasta...even a cold sausage platter (apologies to the hens, who got little of this last dish once Mr Liz had spotted it). Obviously you don't come on this sort of event for the food, but it certainly matched the high standard of the rest of the day.

Most of the tickets for Gincident were sold months ago, the good people of Manchester clearly knowing a good thing when they heard it. However, as the merry barge will sail every Friday night and every Saturday and Sunday afternoon for the next few weeks, it's worth following The Liquorists on Twitter (@theliquorists) or Facebook in case of last minute cancellations and availability. It's great value at £45, and that "no hangover guaranteed" promise that they so boldly offer? Well so far, it's true*. 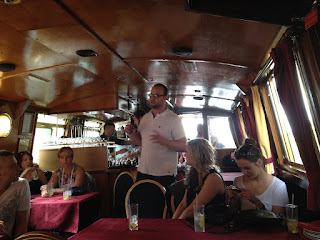 I really enjoyed the gin cruise; before I went, several people had suggested it might be a floating 18-30s style 'party boat' (*shudder*) but it was far from it. Yes it was fun and yes we drank quite a bit, but it was a genuinely enjoyable afternoon with absolutely no forced jollity whatsoever. Good value too, I felt the price we paid was pretty reasonable. I'd definitely think about doing them on a vodka trail.