Now, there are obviously a whole RAFT of reasons why Mr Liz counts his blessings on an at least thrice-daily basis that he has the amazing good fortune of being married to me. There's the constant availability of witty banter on virtually any topic, for example; as long as that topic encompasses some discussion of appropriate height of shoe heels for various occasions, or the behaviour of Derek in this week's episode of Smash, obviously. Or there's the helpful running commentary I am wont to give during the watching of any film, or the way I constantly faff about on social networking sites when he's driving me somewhere. It's all really terribly endearing, I'm sure.

But then, this week I have taken a gigantic, unprecedented leap up the ladder of good-wife-ness, a move that will carry me unsullied through any amount of bad behaviour over the next few weeks. It all began last week, with an out-of-the-blue email from independent beermakers BrewDog: would we like to attend the press launch of their new Manchester bar on Peter Street, and sample some of their tasty, beery wares? As a beer amateur, I didn't know: did we want to go, Mr Liz? The response prompted by this seemingly innocent request was little short of extraordinary: the sight of a grown man marching round the house, every so often raising his fists aloft in sheer triumph and shouting "BrewDog! BREWDOG!!", is not one that I will readily forget.

For it turns out that in the world of beer (and there IS such a world, as any number of eager, thirsty boys will attest to), BrewDog is a very big deal indeed. Born in 2007 when the very enterprising Martin and James decided they were bored with insipid, industrially brewed lagers and ales, the brand has gone from strength to strength - to the point where several different people told me at the launch last night that they had literally been waiting, open-mouthed, impatiently pacing, for the opening of the new bar. And indeed, the bar - a cavernous, be-girdered space - was packed to the iron rafters last night, thanks to an opening night special where any can of rubbish lager could be brought along and exchanged for a pint of BrewDog as part of the Crap Beer Amnesty, a move that really tells you all you need to know about the ethos behind this place: they really want to get Britain drinking good, flavoursome, honest beer that actually tastes of something. 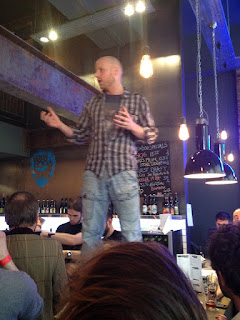 So, on to the beer. As a confessed lightweight - and on a school night to boot - I kept to the lighter end of things, with the winningly titled Dead Pony Club romping home a clear favourite. This is a dangerously easy beer to drink - a seductively fruity pale ale coming in at just 3.8% (although presumably those "just 3.8%"s DO start to add up if you drink about nine of them). I also enjoyed the hoppy Punk IPA, and the strong-but-lush Hardcore IPA - actually ordered by Mr Liz, but snaffled by Mrs Liz, who drank it before realising it was circa 10% proof. Being patently NOT hardcore in ANY way, I retired gracefully at this point, leaving Mr Liz to try the BA77 lager ("chewy, in a good way"), Sink the Bismark (the strongest lager in the world, at a terrifying 41%) and the much-recommended Tactical Nuclear Penguin. These latter two are served in teensy measures, as befits the fact that the smallest of mouthfuls seems likely to floor any innocent passing grandma who (quite reasonably) mistakes either of these thick, dark liquids for a nice drop of sherry; Mr Liz preferred the Penguin, although that might just be because the name has the word "penguin" in. 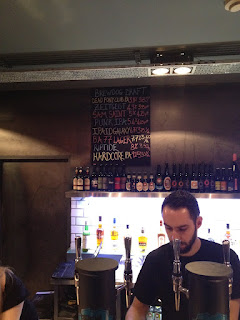 Obviously my beer education has a long way to go, but I feel I have made a promising start here, in an atmosphere that really couldn't have been more welcoming - the staff are happy to offer enthusiastic and knowledgeable advice, and the long tables down the centre of the bar encourage conversation between strangers who wish to bond over a shared love of beer. BrewDog Manchester - joining the fleet of existing doggery brewery bars in Aberdeen, Glasgow, Edinburgh, Newcastle, Nottingham and Camden - is a proud and welcome addition to the city centre drinking scene, and one where I see MANY hangovers in the making... 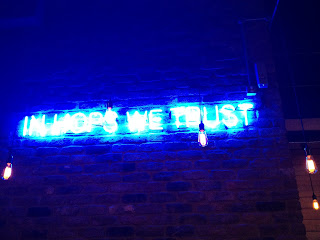 An impressive share! I have just forwarded this onto a friend who was
conducting a little research on this. And he in fact ordered me lunch
due to the fact that I discovered it for him.
.. lol. So allow me to reword this.... Thank YOU for the meal!
! But yeah, thanks for spending the time to talk about this subject here on your web page.
My web site: red high heels