Now, I'm aware that a casual, non-educated sort of glance at this blog MAY suggest that I am in the habit of going out for a drink or two. But whilst perhaps there IS some truth in this (OK, OK, there is), I am strictly a wine drinker - one, moreover, who accepts that she is not really very good at drinking spirits. I enjoy a gin and tonic every year with my mum whilst peeling vegetables for the Christmas lunch (and to be honest, I enjoy this as much for my sister's not-very-subtle glances at her watch as anything), but that's about it. I am most certainly NOT a whisky drinker; in fact, I would go so far as to say BLEURGH to whisky.

That's not to say I haven't tried to like it in the past. There was, for example, the uncomfortable moment when I poured diet Coke into something expensive at a friend's house, in order to make it more palatable; his apoplectic expression (complete with actual comedy splutters) indicated that this was not in fact an acceptable course of action. And the one and only time I ever drank a LOT of whisky was in 2001, when Jack Daniels were giving out a range of highly desirable gifts in Didsbury's Pitcher and Piano to people who bought two doubles at a time. Surely I only have to say that I ended up in Friday's Nightclub, still dressed in the clothes I'd worn to work, and no further evidence is required of my inherent incompatibility with this evil devil-brew.

So when The Liquorists ask if I'd be interested in going on their Whisky Trail - a tour around five bars in Manchester's Northern Quarter, with a shot and a whisky-based cocktail in each and grub at the end - I say thanks, but no thanks. They ask again, confident that they can win me round and expand my bibendi horizons. And - fatally - Mr Liz has by now got wind of the whole thing, and is looking at me with the kind of betrayed yet hopeful expression you see on the faces of special acting dogs in charity appeals. For Mr Liz LOVES whisky, to the point where he has to be put to bed in disgrace each year after the annual Manchester Whisky Festival, and Mr Liz now wants, more than anything, to go on the Northern Quarter Whisky Trail.

So we go, and with utterly dazzling predictability, I am a whisky convert by bar number two. Here's the whole slippery slope in all its surely-it's-too-early-to-be-drinking-this-much-hard-liquor glory: 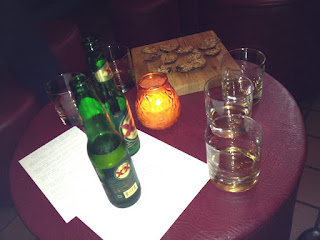 1. Socio Rehab. It is here that we meet the rest of our drinking party and are introduced to Tom Sneezby, one half of The Liquorists and a man who clearly enjoys his job VERY much indeed. Our first drink is a shot of Woodford Reserve, and it frightens me a little, for it is just six o'clock in the evening and I'm surrounded by people swilling and gasping and mmmmmmming and generally making approving noises about a drink I don't really like very much. I try a sip or two, and then get Mr Liz to drink the rest when Tom isn't looking. But then an Old-Fashioned appears, and it is LUSH - tangy and sweet and bitter and lovely. I drink it all and Mr Liz looks disappointed.

2. Trof. Next up, Trof, and I blame Tom entirely for the fact that Mr Liz now knows that there is a new first floor Bourbon bar here - I may never see him again. Here we have Jim Beam Black. I like it. We have a cute enamel mug filled with Mint Julep, a drink that reminds me of summer and (I'm fairly certain) must count towards your five a day. I like this even more. I like Tom, I like Trof, I like the other people I'm with, I like that I feel a little tipsy and it's still broad daylight outside...I like EVERYTHING, in fact. Even whisky.

3. Apotheca. Just down the road at Apotheca, we are whisked downstairs to find a table set with TWO glasses of whisky each - one is the Scottish Auchentoshan, which I really enjoy, and the other is the *deep breath* Suntory Yamazaki Japanese Water of Life, which I don't. I do however, very much like the Whisky Sour, which reminds me a little of the Haribo Tangfast Chicks I bought to give out to my students at Easter and then ate myself when the coursework marking got on top of me. 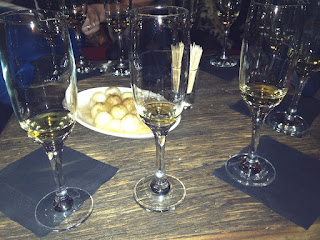 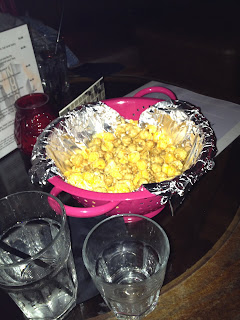 4. NoHo. I have never been in NoHo before, but will definitely go again - this place has a great vibe and an irresistable-looking dance floor that sadly no-one else is tempted by at 8pm in the evening. Here we nestle in vast leather armchairs and snack on so-wrong-it-HAS-to-be-right cheese and caramel popcorn whilst drinking Jamesons. The cocktail here is most people's favourite of the night, and in true professional style, I have completely forgotten what it was called, what was in it, or indeed what my own name might be. 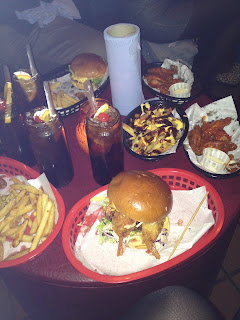 5. Back to Socio. The fifth and final stop is technically Almost Famous, but as it's their final weekend and the queue to get in now stretches back approximately as far as Wales, the food and drink is sensibly sent downstairs to our hungrily waiting mouths as we sit in comfort in Socio. Here, we drink Jack Daniels and Drugstore Bandits (a drink I have become most attached to during the 58 times I have already been to Almost Famous in the last eight weeks), and daintily eat the enormous burgers you see here. I probably have barbecue sauce all down my chin, but I don't care, for I am a WHISKY DRINKER, and I am proud to hold my glass aloft and proclaim ALL IT STANDS FOR.

By nine of the clock, it's all over. We loudly and lustily applaud Tom, who has done a sterling job keeping us on track throughout the trail's brisk pace, and has even taught us a few things. Most of all, he has taught me that I like whisky, and for this I am unsure whether to salute him or curse him; at least I ended up back in NoHo rather than Fridays this time...

- The Whisk(e)y Trail runs on Wednesdays, Thursdays and Fridays for the next six weeks, and is priced at £30, £35 or £40 depending on which night you go. They start at 6pm and 7pm each night, and there are exciting whispers about trails later in the year based around vodka, rum and tequila, as well as trip in July/August that involves large quantities of gin and a barge on the River Irwell...see you there.
Posted by Liz at 02:43

I don’t even know the way I finished up right here, however I assumed this publish was great. I do not realize who you are but definitely you are going to a well-known blogger in case you are not already. Cheers!

It is all good stuff and I am very jealous of your night out!

Surely worth a trip back to Manchester...? And it WAS a World of Whisk(e)y tour - all just going to show how terribly versatile I am as a whisky drinker. But yes, I do prefer Bourbon, I think *knowledgeable whisky-expert face*

Definitely. One night of the Whisky Tour and a night in with a Kismet takeaway.

Just need to sell the idea to my wife ;-)

What woman could POSSIBLY say no to such a weekend? I couldn't :)

Problem is that they are not running the trail any time that we can get to it. Do you think they would do us a special, seeing as we'd be coming from so far away?