Just a few short years ago, if you'd outlined the concept of the Supper Club to my incredulous ears I would have called you a DREAMER, a crazy, beautiful optimist with a head full of shiny ideas and a suitcase full of unrealistic promises. After all, there's no way you'd get a load of previously unaquainted folk sitting down together to dine on a communal feast, often in the home of some complete stranger, from a menu with no choices, and no faff, and no obsequious waiters, and no hefty great bill presented at the end of it...that would just be CRAZY talk.

And yet. The advent of the Supper Club has been a revelation, and such an obvious opportunity for greedy people to eat even more than they did before that it's really no wonder the whole of the UK has fallen for its charms. And Manchester is no different - from the admirable Clandestine Cake Club, where ladies in nice dresses get high on sugar-fuelled confections and earnestly discuss anti-cracking techniques, to the South Manchester-based Our Paleo Kitchen, serving caveman-style goodies in a home environment (it's OK - I've been assured that cavemen are VERY keen on wine), there really is a Supper Club to suit everyone.

Of course, a Supper Club doesn't have to be in someone's home, as Chorlton's North Star Deli has proved through its phenomenally successful Join Us 4 Supper nights. I have been an enthusiastic supporter of these from day one, nobly allowing the super-talented (and recently be-fringed) Deanna Thomas to cook me up three courses of seasonal goodness while I quaff wine and talk with like-minded souls in the chic environs of her classy deli. Sometimes, I even remember to photograph the food and then cobble together a blog about it, but then that's just the kind of dedicated professionalism you've all come to expect from me.

This month's Supper Club was something special, held in conjunction with Diablo and Supper, which essentially meant that AS WELL as another Top Thomas Menu, some lovely people came along and plied us with wines from Casillero del Diablo that had been thoughtfully matched to each of the three courses. I now know that I was in the early stages of tonsilitis during this event, and that is perhaps the only reason I remember ANY of the following: 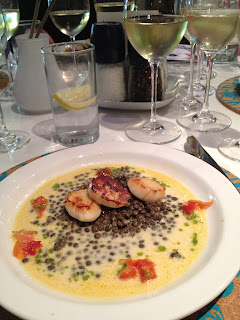 Canapes and Fizz: Two of my favourite words in the whole of the English language. The canapes were pure class - poppy seed macaroons with smoked salmon and lemon cream cheese, and rabbit empanadas - moreish cripy parcels of succulent pet-based goodness upon which I wish to dine for the rest of my life. The fizz - generously poured by the lovely Briony, who I suspect would be welcome at ANY party - was Brut Reserva Chardonnay, and utterly, utterly delicious *pretends is birthday and sends Mr Liz to shop to stock up*

Starter: King scallops with puy lentils and a Chardonnay sauce, as pictured here seconds before its speedy demise. Plump, tasty scallops, pillowy-soft within and sweetly caramelised without, reclining seductively upon a bed of healthy lentils (body = temple and all that) amid a sea of rich, buttery sauce (negated by lentils - see nutritional notes above). I have but one complaint here: I had A LOT of sauce left, and had I been in less exalted company I would have been able to go for a surreptitious slurp; as it was, I had to leave it on my plate with much reluctance and not a little anguish. The accompanying wines were the Casillero del Diablo Chardonnay, which unsurprisingly complemented the starter to perfection, and the peppy Reserva Privada Sauvignon Blanc. You can see from the picture how generous the servings were (no half-an-inch-lost-in-the-bottom-of-the-glass nonsense here), and a special mention must go to the ever-chivalrous Mr Liz who, spotting his wife was feeling unwell, stepped in to help drink her wine. He is STILL loitering now, hoping to receive some kind of medal for his actions. 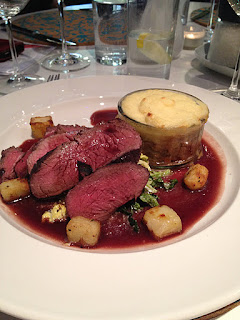 Main: Red deer (venison to you and I), red wine sauce and Hunters Pie - cottage pie with venison mince and celeriac topping. I have little to say about this other than om, nom, and indeed nom: the deer was meltingly tender, and the venison pie a revelation - who knew that celeriac, the world's ugliest vegetable, could scrub up so well? The wines with this course were Shiraz and Carmenere, the latter proving to be most people's favourite wine of the night despite its lowly price tag *texts Mr Liz while en route to shop with orders to buy this as well* and plenty of people *names no names - MR LIZ* were spotted holding out their glasses for seconds. Luckily, the ebulliently knowledgeable Hans Joachim Wadsack (here to talk to us about his wines, and happy to answer either to Joe or his splendid Twitter moniker "Vinesack") was open to such cheek and kept pouring with good grace, resisting the suggestion that certain individuals should just open their mouths and have wine poured straight in, in manner of alcoholic fish or similar.

Dessert: Blood Orange Tart. Deanna excels in the pudding department, and this was exactly the kind of dessert that slips down without any trouble even after the consumption of approx. half a deer per head. It appeared with a dessert wine, an ilk of which I am not at all fond, but to my surprise I was able to rate the Casillero del Diablo Late Harvest Sauvignon Blanc dessert wine "not half bad actually", before the rest of my glass was whipped away by a boy who was clearly dangerously low on alcohol, not having drunk for several seconds at that point. Even better, it was an EXCLUSIVE, and I can now legitimately call myself a TRAILBLAZER, in wine and stuff. 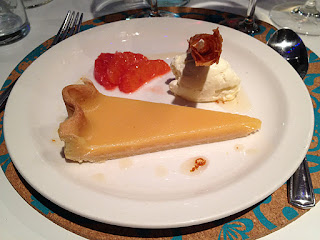 The next Supper Club is lined up for Feb 23rd, and looks set to be another great night - keep an eye on the deli website for details, and ensure you don't sit ANYWHERE near thirsty-looking boys...
Posted by Liz at 03:37